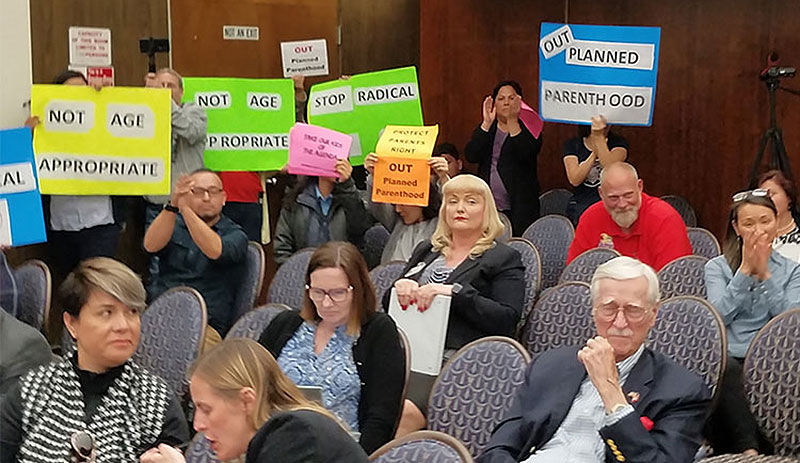 Outraged parents organized by California MassResistance at their School Board meeting in Anaheim, CA.

In September 2021, headlines across America spotlighted a letter from the National School Boards Association (NSBA) to Joe Biden.

The letter was a hysterical reaction against parents across the country who had gone to their local School Board meetings to express outrage over “Critical Race Theory” indoctrination, COVID lockdowns, and the “transgender” agenda being pushed into their children’s classrooms.

The NSBA letter labeled the outspoken parents “domestic terrorists.” It accused them of bringing “extremist hate,” “threats,” and “acts of violence” against School Board members at the meetings. The NSBA implored Biden to direct the FBI, US Dept. of Justice, Dept. of Homeland Security, and other federal agencies to coordinate and direct their energies against this “crisis affecting America’s public schools.” This grandiose act was clearly meant to intimidate and silence any meaningful dissent.

Background – What was behind this excessive reaction?

Originally, the state school boards associations were set up to lobby state legislatures on behalf of the local school boards – and the public – to fortify the public schools. It was a counter to the lobbying arm of the state teachers’ unions. The National School Boards Association was set up to lobby Congress, countering the national teachers unions’ and the federal Dept. of Education.

But in recent decades, both the state and national school boards associations have become what the American Library Association is to libraries: an organized force to push hard-left ideology. The associations stand in opposition to most parents and propagandize local school board members. They push all the latest leftist ideologies through their recommended policies and training sessions. Their lobbying efforts are now very similar to the teachers’ unions.

State associations pay hundreds of thousands of dollars in dues and other fees to the NSBA each year.

Parents across America react to the NSBA letter

Parents across America were furious about NSBA’s letter and let their local public officials know it. A number of state school associations issued letters distancing themselves from the NSBA letter. Within three months, 19 state organizations broke away from the NSBA entirely.

But after the initial surge of states breaking away, other states dragged their feet on taking any substantive action.

In December 2021, our Organization Director Arthur Schaper met with chapter leaders of several of our state MassResistance groups. Our Arizona leader said that more needed to be done about the NSBA’s action against parents. The leaders decided to concentrate on eleven states to generate grassroots pressure to force their break from the NSBA.

When first contacted, some of those state school board associations responded positively, some negatively, and some not at all.

We were most surprised when a member of the Texas Association of School Boards had a long (and very disturbing) discussion with Arthur Schaper defending Critical Race Theory and the “need” to push it on young children.

On the other hand, the executive director of the Nebraska Association of School Boards told Arthur, “We want to meet with parents and work this out.” It was a good start.

But we kept pushing hard. By late February – after just two months – our efforts helped get three states to leave the NSBA:

On Oct. 13, 2021 (two weeks after the NSBA letter), the Idaho School Boards Association (ISBA) wrote a letter somewhat distancing itself from the NSBA. (But it still echoed the NSBA’s obnoxious rhetoric, called out “the disruptive and – at times, frightening – behavior that has shown up in school board meetings in Idaho and across the country.”)

Then on Oct. 26, 35 Idaho state legislators signed a letter urging the state association to break away.

But nothing was happening, so Idaho MassResistance began contacting the ISBA. On Oct. 28, the Deputy Director of the ISBA sent an email responding to one of our Idaho MassResistance activists and Arthur Schaper. He said that the ISBA intended to continue to work with the NSBA – “to make NSBA better and to ensure our national association continues to represent states like ours.”

Idaho MassResistance activists across the state got to work. They appealed to their local School Board members to contact the ISBA and also repeatedly contacted the ISBA themselves – demanding that they sever ties with the national organization.

The pressure worked! On February 21, 2022, the ISBA announced that they were severing ties with the NSBA! 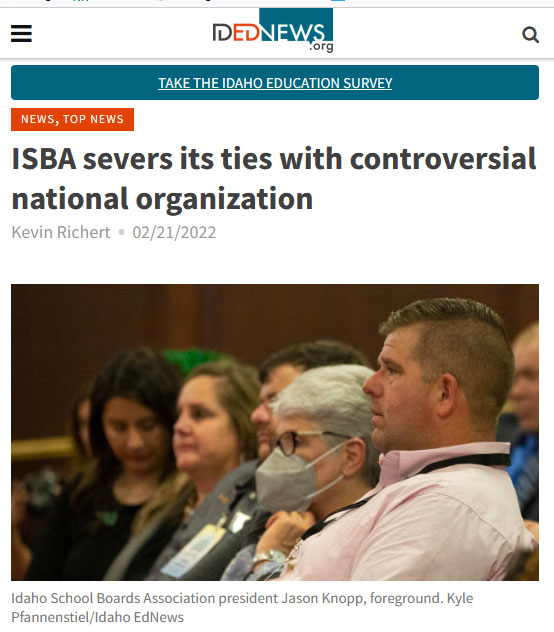 In December, at least one Arizona school district voted to leave its state association, the Arizona School Boards Association (ASBA), because it continued to be a member of the NSBA. According to news reports, the ASBA had insisted that the NSBA “had apologized” for the letter and so it was not necessary to sever ties.

Our Arizona MassResistance group contacted the fiery parents group in the Vail Unified School District, and together they conducted a vigorous campaign to get the ASBA to change its mind. On Feb. 16, the ASBA announced they were quitting the NSBA. 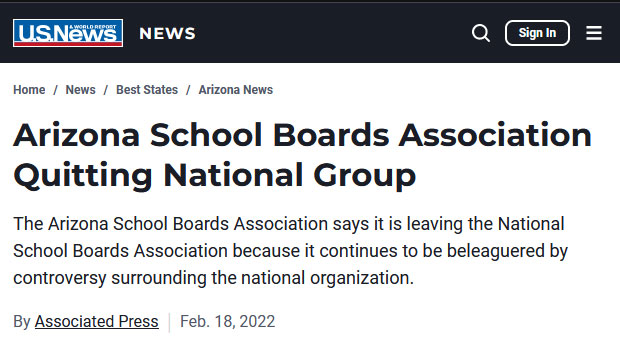 While ASBA has left the NSBA, the we’re still monitoring them for bad policies disseminated to its local school boards. For instance, see its webinar, The State of LGBTQ Education in Arizona (2019, still posted). Furthermore, much of the content sent onto the local school boards is hidden from the general public; that needs to change.

The West Virginia School Board Association (WVSBA) was dragging its feet, apparently hoping the issue would go away. Starting in December 2021, our West Virginia MassResistance chapter began contacting the WVSBA, demanding that they leave the NSBA.

It definitely got their attention! On February 26, we received this email from our WV Chapter leader:

Yesterday, I received another letter from Gus Penix, who is president-elect of WVSBA. In the letter he wrote, "I am writing in response to your communication dated Jan. 28, regarding the WV School Board Association's (WVSBA) affiliation with the NSBA. On Saturday, Feb. 19, at our Delegate Assembly meeting in Charleston, the WVSBA voted to disaffiliate from the NSBA."

We are still working hard on Nebraska, Delaware, New Jersey, and other states.

These victories are long overdue – and just the beginning of the work that needs to be done. It’s time for every state school board association to disaffiliate from NSBA, or for local school boards to resign from their state groups if they do not!

But whether or not a state school board association has cut ties with the national association, citizens still need to be closely monitor it. Many of these associations (even in “conservative” states) are still pushing the LGBT and CRT agendas to their local school boards!

In early 2020, MassResistance drafted an expansive exposé on the national and state school board associations, which unfortunately we didn’t get around to publishing. Given the current circumstances, we plan to update it and publish it soon.