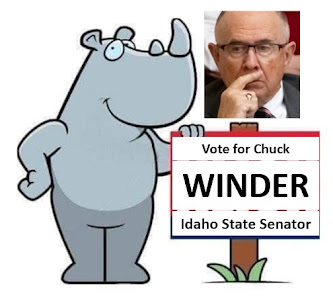 "The Idaho State Senate Majority Caucus strongly opposes any and all gender reassignment and surgical manipulation of the natural sex of minors.

OK, so they recognize that these procedures are wrong ... BUT ....

HB 675 undermines parental rights and allows the government to interfere in parents' medical decision-making authority for their children. We believe in parents’ rights and that the best decisions regarding medical treatment options for children are made by parents, with the benefit of their physician’s advice and expertise.

This is the biggest crock I have ever read. Parental rights are not absolute, and they have never been absolute. Parents do not have a right to sacrifice their children on the altar of transgenderism. Parents are not allowed to give their children alcohol, methamphetamine, or to let them drive a car.

The state routinely interferes with parental decisions on a number of issues.

"It is against medical advice in Idaho and is counter-indicated by the Idaho Medical Association (IMA). Among other provisions, HB 675 outlaws gender-affirming surgery for transgender minors; and the IMA has confirmed that this is “already outside the generally accepted standard of care and is not being done by physicians in Idaho.”

The Idaho Medical Association has been ideologically captured, as one witness shared in the Idaho House State Affairs Committee. They have been overrun by left-wing ideologues who hate children and want to profit off the wanton destruction of young bodies and minds. This is truly disgusting.

Why would any legislator give into a bunch of professional social justice warriors on this issue?

"The bill’s language in its current form could be interpreted to extend into the realm of medically necessary care for kids that is in no way related to transgender therapy, but serves children with highly specialized medical needs.

Total BS! The bill sponsor, State Rep. Bruce Skaug, made it explicitly clear that the bill would allow individuals with diverse secondary sexual characteristics to get the care that they need. The bill made it very clear that the spirit and letter of the law is to stop this madness of treating young people with gender dysphoria. Nothing could be clearer on this matter.

The bill worked to carve out this area of care, unfortunately it falls short by limiting it to verifiable genetic disorders. Since many of these acute medical conditions cannot always be verified as a genetic disorder or done so in a timely manner, the proposal has unintended consequences."

This is another mad-dash, slap-dash excuse to justify not doing anything. Big Business and Big LGBT have teamed up to seduce, coerce, and intimidate legislators not to do anything.

The fact is that Republican leaders want to fall on their sword in the short-term so that they can keep the big money flowing in for their campaigns and their pet projects. Of course, the biggest culprit for this bill's stalled status is none other than Governor Chicken Little himself.

Brad Little does not want to have to sign off on necessary legislation like H 675 because he wants to make nice with Big Business. He wants to be invited to all the "Kool Kidz' Partiez" and make nice with the Silicon Valley elites.

He wants to be liked, and he wants to hold onto whatever trappings of Big Monied Power he can manager. The State Senate is doing the bidding of the Govenor, as usual.

But ... Gov. Little is facing a big primary challenge from Lieutenant Governor Janice McGeachin. She has stated boldly in a recent press conference that she will fight to end sex mutilation of minors, and she wants to get rid of all pornography and perversion in Idaho's public schools and public libraries.

It's time for Gov. Little and the Idaho Senate RINOs to tell the Idaho public the truth:

Either they side with the best interests of child and Idaho's future, or they are a bunch of creepy cowards and petty perverts who want to appease Big Business and the BIG LGBT Hate Machine.

Contact the Idaho State Senate Leadership NOW and tell them to move on H 666 (repeal obscenity exemptions for schools and libraries) and H 675 (ban sex mutilation of minors):

Posted by Arthur Christopher Schaper at 11:29 AM