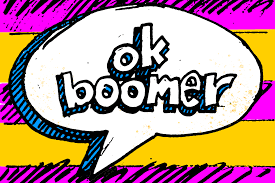 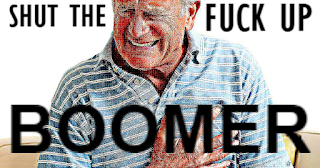 How many of you have heard this name-calling?

I have been hit with this name a few times, too.

And I am not a Boomer! (I am not an animal, either, but that's another story for another day, with apologies to Jerry Seinfeld)

Granted, the Baby Boomer generation has a numnber of liberals, and many of them still have an attitude of entitlement.

But one cannot paint an entire group of people in one age demographic with such a broad brush.

The truth is, the segment of the population that runs to "OK Boomer" when things get rough, or when they want to disdain the opinion of others, they just mock them for their age.

I have worked with a number of Baby Boomers in MassResistance. The President of the Organization is a Baby Boomer.

I have also heard testimonies from Boomers who acknowledge that they did nothing, or at the very least did not do enough to stop the Marxist, regressive leftism that has become rampant in damaged urban areas around the United States.

They recognize that they did not fight hard enough. Some of them are stepping up and fighting back more than they had before.

But let's cut to the chase.