Liberals love to compare the Bush Administration to the Obama Administration, as if comparison and contrast justify wrong-doing from any President.

The increased spending spree under George W. Bush was wrong, along with the unfunded entitlement expansion of Medicare Part D. The 2005 Highway Transportation bill was filled with political, promotional pork, and everyone benefited.  Let us not forget how may Republicans went to jail for corruption in connection with the Jack Abramoff scandal.

Right and wrong from our leaders is not a function of political party, but the truth.

Yes, here is a comprehensive list of embassy attacks during the Bush Administration: 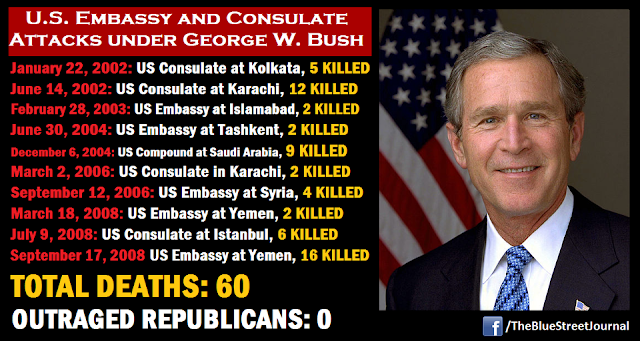 What is the difference between this set of attacks and Benghazi?

President Bush never minimized the losses of people. He never made excuses for standing up to terrorism around the world.

He did not blame their deaths on a video, nor did he direct one of his ambassadors to read from scrubbed talking points, or mislead the public for months (now years) on the incident.

He did not supervise a Secretary of State who shouted at a panel of US Senators: "What difference does it make?"

Other concerns give us more perspective on the Obama Presidency compared to the Bush Administration.

Here are two to consider:

2009 -- Nidal Hasan, a psychiatrist and major in the U.S. Army Medical Corps, is the only suspect in a shooting rampage at Fort Hood, Texas, that left 13 soldiers and civilians dead and more than two dozen others wounded on Nov. 5, 2009. Hasan is awaiting a military trial that could bring the death penalty. Prior to the shootings, the government intercepted at least 18 emails between Hasan and Anwar al-Awlaki, an American-born cleric tied to al-Qaida.

Yes, there were attacks on American consulates during the Bush Administration. However, Middle Eastern jihadists were on the run, not the attack. Libyan Dictator Muammar Ghaddafi gave up his weapons program. Stable governments remained in power throughout the Arab World, and their leaders were slowly expanding the voter franchise to their people. Allies of Israel were defending the country against Islamic attacks, as well.

The verdict? President Obama and his liberal supports cannot rebut their massive foreign policy/terrorism failures by pointing to the consulate attacks under the Bush Administration.