“Save James” bills in Texas Legislature would stop ghoulish “sex-change” procedures on children. But LGBT activists demand these continue.

Protest and counter-protest outside Rep’s local office in suburban Dallas/Ft. Worth. 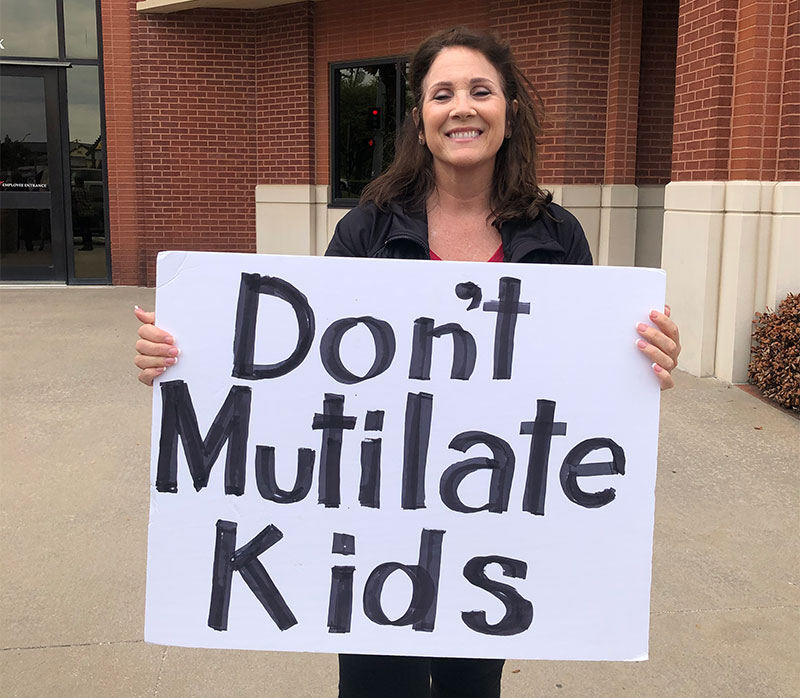 Facing the transgender mob outside of Rep. Stukey's local office. You can't mince words with those people.

The LGBT movement’s dark obsession with children has rarely been so blatant. Few pro-family groups are willing to openly confront that – but MassResistance is an exception!

As we’ve recently reported, Texas MassResistance has been lobbying hard for three important bills moving forward in the Texas Legislature (dubbed the “Save James” bills). These would stop “sex-change” procedures on children. People are outraged that children are being disfigured for life and sterilized to please a radical ideology.

The bills have been aggressively opposed by the LGBT movement as well as big business. Children’s “sex-change” treatments are a huge money-maker for big pharma and “gender clinics.”

As LifeSiteNews recently reported, 43 companies – several of them major national corporations  – have announced their active opposition to this legislation. They are using their immense lobbying power and financial resources to stop it.

One of the opposition’s more distasteful strategies has been to harass and intimidate legislators supporting these bills with loud “protests” by hideous transgender activists at the doors of their home-town local offices.

One target, Rep. Lynn Stuckey (R-District 64), has been a consistent conservative on pro-family issues. But when lobbyists noticed that he was starting to waver over pressure on these bills, they saw him as an easy target. So on April 21, a horde of transgender activists descended on his local office in Denton, TX (a northern suburb of Dallas/Ft. Worth), hoping he’d cave. 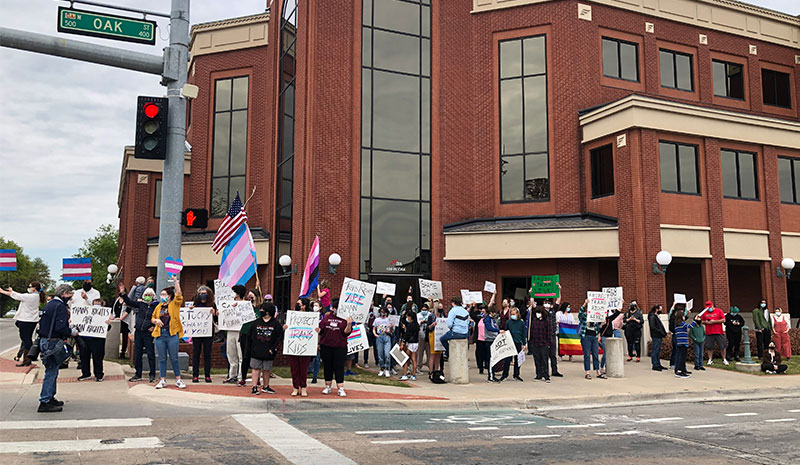 The transgender "protest" outside the local office of Rep. Stuckey in Denton. They hoped to intimidate him and his staff. 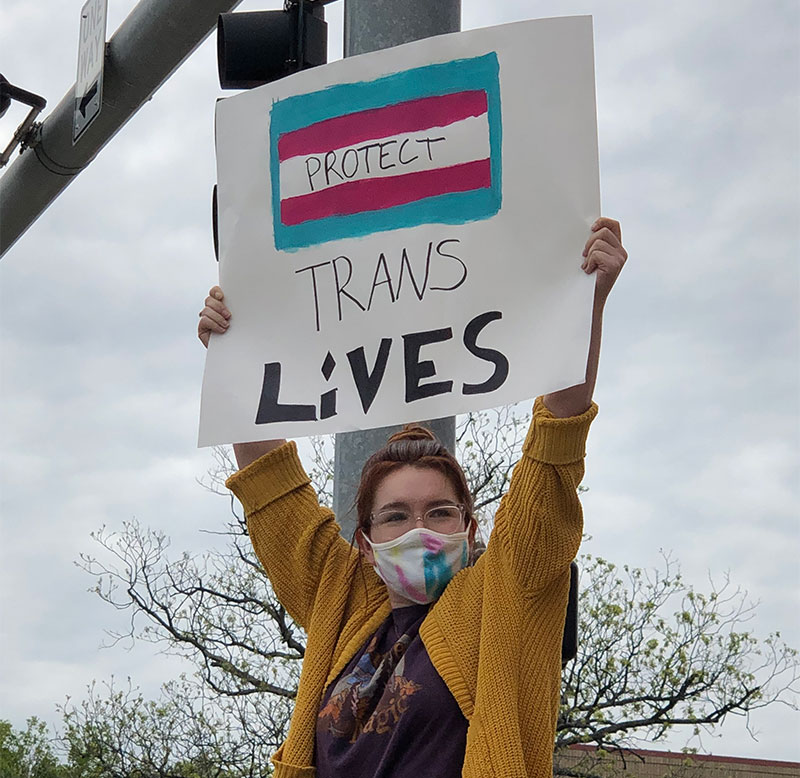 The usual LGBT dishonesty. In fact, the best way to protect "trans lives" and "trans youth" is to give them the psychological help they need, not cruelly mutilate their bodies. 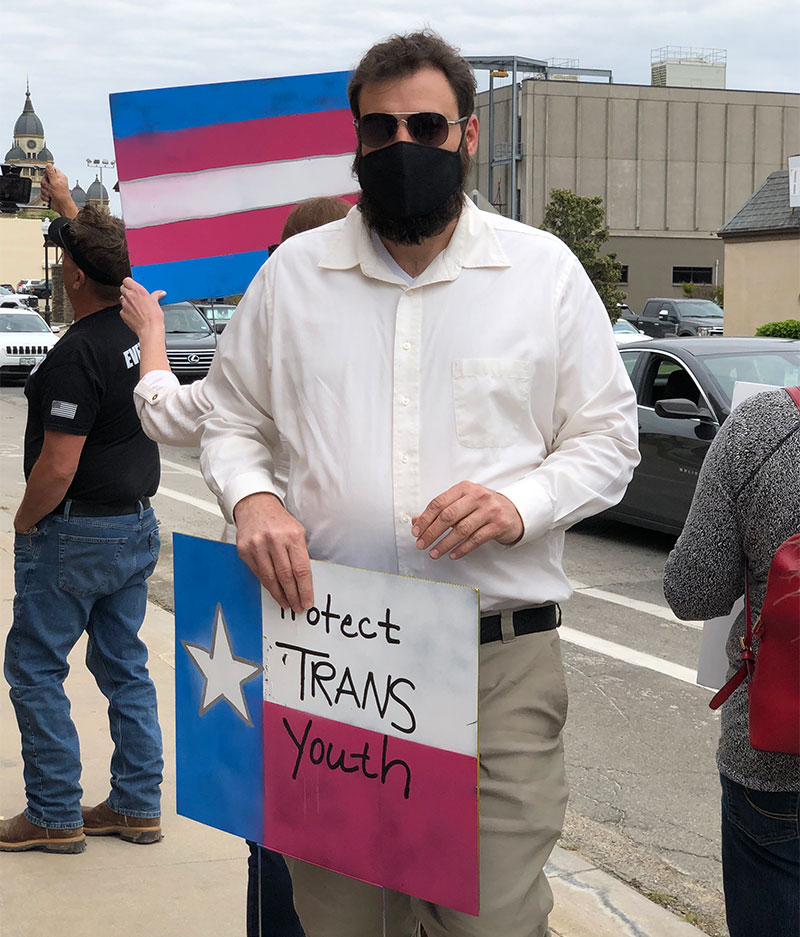 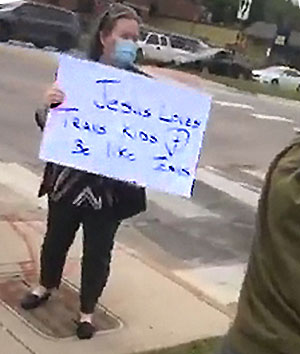 Not surprisingly, they twist and distort the Bible. Her sign says: "Jesus Loves Trans Kids. Be like Jesus." (If you love trans kids, don't mutilate their bodies!)

But it didn’t quite work out the way they planned. Kevin Whitt, our Texas MassResistance Assistant Director, had caught wind of the demonstration and quickly organized a robust counter-protest just several yards away. The LGBT crowd was clearly rattled. Telling the truth about what they’re doing to children tends to have that effect on them, and our people were not afraid to do it! 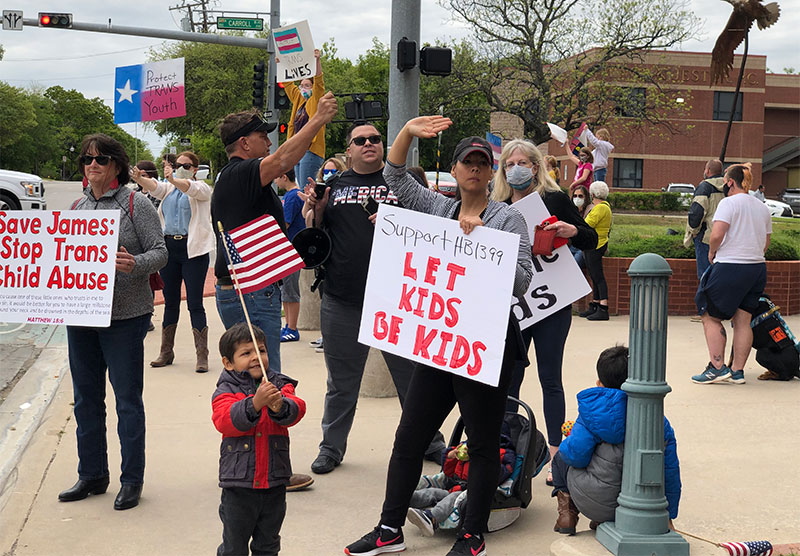 Our group was fairly close to them, and definitely raining on their parade!

At one point, one of them came over to “dialogue” with our people. That is a common LGBT tactic when their opposition is resolute; they try to defuse our arguments and energy. But that didn’t work this time, either! 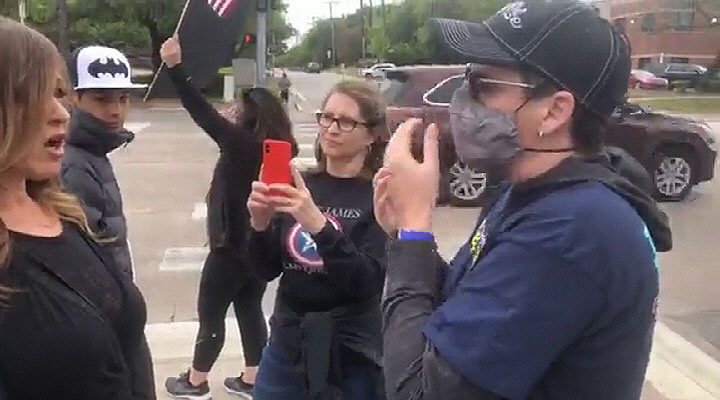 One of the transgender activists (right, wearing mask) came over to "dialogue" with us.

We weren't in to mood to "dialogue." Here is some of the interaction:

MassResistance: Why can’t you wait until these children are adults?

Trans activist: Because their emotional evolving is absolutely at stake.

MassResistance: No. Only an adult can make that choice. The ramifications are huge. It’s castration. It’s genital mutilation.

Trans activist: They’re not doing that surgery at the clinics in Texas.

MassResistance: Yes, they are doing surgeries on 14-year-olds. And that is a proven fact.

MassResistance: Yes. In Austin. And other places.

Trans activist: OK. I care about it. Any surgery is significant. But I also believe that there are some things that are worth it.

MassResistance: There are people who suffer from identity disorders well into adulthood, and it’s not just a matter of surgery to fix that. Doing this to a child is nuts … Gender dysphoria is a real mental illness. 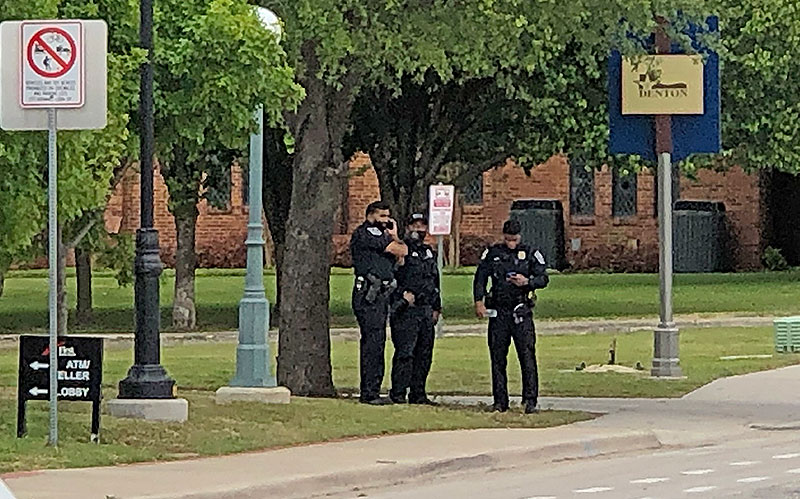 The police were standing nearby, but didn't need to get involved.

Our efforts were successful! We spoke with Rep. Stuckey’s office today. His staff told us that he is now solidly on board support all three “Save James” bills. We’re pleased that he got the message that the LGBT movement is the wrong group to listen to in Texas!

Many pro-family people around the country believe that the transgender activists and their allies who fight against this kind of legislation are simply concerned, honest folks who have a misguided opinion on this issue. Our people often think that if we talk it through with them, they will see the truth.

Unfortunately, that is completely wrong. We’ve interacted with the other side many times over the years. They know full well what this does to children. They can see it themselves. And they certainly hear what we’ve been saying. But they don’t care. Their hatred of traditional values and their desire to be accepted by their friends is very powerful. They lie to themselves and to everyone else. And as we’ve all observed, many of the “activists” clearly have their own mental health problems that fuel that behavior. And they’re obsessed with “identity” and sexuality issues.

The only thing that’s effective is to stand up to them and never back down to their lies, anger, and hysteria.

Posted by Arthur Christopher Schaper at 7:19 AM