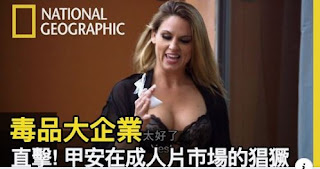 This featured video from National Geographic focused on the spread of the methamphetanie crisis throughout the state of California.

She has to "feel good" in the shoot, so to speak.

Here's what stood out for me, though, when I was watching this segment.

I felt sorry for this woman, and I saw her as a lost, decrepit woman. She is a drug fiend. She is dependent on a chemical just to function through the day. She gives away her body in front of a camera. She is a sex fiend, a sex addict. She sells herself to debase herself, and then she sells herself yet again.

It's a cycle of defeat, of shame, of loss, of more defeat, then shame yet again.

But then something else hit me: Am I really any better? Can I say that I am any better?

If anyone were to pry open my flesh, my mind, my feelings, they would see that I am addicted to things. They would see sexual perversions percolating throughout.

Paul was unsparing in how fallen our flesh is:

"For I know that in me (that is, in my flesh,) dwelleth no good thing: for to will is present with me; but how to perform that which is good I find not." (Romans 7:18)

I remember a comforting word which Pastor Joseph Prince had shared with a congregant in his church some time ago. This man had served time in prison, and before that he was placed in a foster home for at-risk youth. He had failed, fallen, sinned in so many terrible ways. Because of all the sins he had committed, he felt that he could not really come to God, and that he was in a worse-off position than the pastor.

And that just about says it all.

Everyone of us born into this world is a great sinner. We are all dead in Adam.

We can become alive in Christ, set free from sin, reckoning ourselves dead to sin, and alive in the Son!

"11Likewise reckon ye also yourselves to be dead indeed unto sin, but alive unto God through Jesus Christ our Lord.


12Let not sin therefore reign in your mortal body, that ye should obey it in the lusts thereof." (Romans 6:11-12)

There but for the grace of God go I.

This revelation has become even more powerful and moving because I now understand fully what Abraham, what David, and what Paul the Apostle of grace shared with the Romans:

"1What shall we say then that Abraham our father, as pertaining to the flesh, hath found? 2For if Abraham were justified by works, he hath whereof to glory; but not before God. 3For what saith the scripture? Abraham believed God, and it was counted unto him for righteousness. 4Now to him that worketh is the reward not reckoned of grace, but of debt. 5But to him that worketh not, but believeth on him that justifieth the ungodly, his faith is counted for righteousness.

6Even as David also describeth the blessedness of the man, unto whom God imputeth righteousness without works,

7Saying, Blessed are they whose iniquities are forgiven, and whose sins are covered.
8Blessed is the man to whom the Lord will not impute sin." (Romans 4: 1-8)

I am made the righteousness of God in Christ Jesus because of what Jesus did. It has nothing, absolutely nothing to do with me. When I understand that this gift has been given, and that I am invited to receive--and keep receiving!--this gift, His life is able to flow through me.

There is no longer any desire to sin, since under grace "Sin shall not have dominion over you." (Romans 6:14)

I was addicted to many things. Most recently, I shared that I was addicted to diet soda, and that nearly killed me. But God is very good. He works with us even when we are still struggling with sins in our minds and bodies.

He guides us by His grace, and His Spirit continues to transform us from glory to glory (2 Corinthians 3:17-18).

If we are all honest with ourselves, any one of us would stumble into the same sins. If we rely on our own goodness, if we think that we are "better than", we would fall into the same perversions, as well.