Well, this is some interesting news!

Check out who pled guilty to disturbing the peace while serving as a Torrance PD Officer:


*In 1984, Officer Geoff Rizzo became upset when someone backed into his car in front of a bar. Reiter said Rizzo attacked the driver of the other car and that the off-duty officer was eventually charged with battery, malicious mischief and disturbing the peace. Yim said the other charges were dropped after Rizzo pleaded guilty to disturbing the peace and paid restitution to the victim. Rizzo was suspended from work for one day.

For more information, check out this article from the Los Angeles Times archives.

Well, I guess it comes as no surprise that Geoff Rizzo would speak at the Torrance Democratic Club.

They seem to attract lots of criminals and deviants! 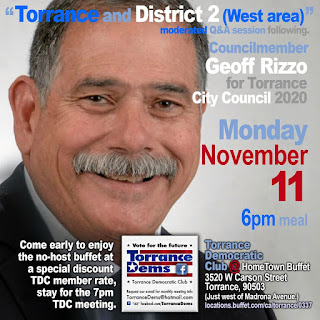