In June 1982, a group of cases among gay men in Southern California suggested that the cause of the immune deficiency was sexual and the syndrome was initially called gay-related immune deficiency (or GRID).6 Later that month, the disease was reported in haemophiliacs and Haitians leading many to believe it had originated in Haiti.7 8 In September, the CDC used the term 'AIDS' (acquired immune deficiency syndrome) for the first time.

It's one of the worst-kept secrets out there.

In the early 1980s, when AIDS was exposed to the larger public, the scientific community wanted to call in GRIDS. 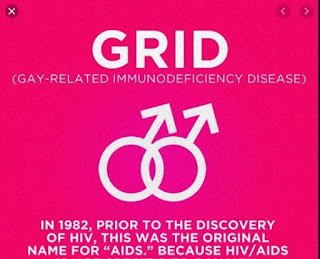 That says it all. Yes, "Gay Related Immuno-Deficiency Syndrome."

Of course, because of the perverse dictates of political correctness, the name was changed to AIDS.

The vast majority of people suffering from the malady at the outset of its outbreak in the United States were ... homosexuals.

That says it all. GRIDS should have been the name.
Posted by Arthur Christopher Schaper at 3:52 PM