For the last two years, I have been following the perverse tragedy of Amos Yee.

A refugee from Singapore, Yee ran afoul of his country's strict laws regarding freedom of expression. In Singapore, one can face stiff fines or even jail time for insulting or wounding religious or ethnic sensibilities,

In 2015, Yee did exactly that, even though he was still a minor. He produced a number of videos denouncing Singapore's Founding Father Lee Kwan Yew. His rhetoric included a great deal of vile cursing and vulgar statements, as well. He also called Jesus Christ a fraud, and he even shared a picture of Lee Kwan Yew in bed with Margaret Thatcher, mocking the Founder's pro-free market economic policies.

He ended up spending over 50 days in jail for his hateful remarks. At the same time, he turned into a cause celebre among the liberal elites in Singapore, and even some free-speech activists in the United States.

Fearing that he would be jailed again if he shared his views further, he fled Singapore and sought refuge in the United States in 2018. President Trump attempted to block his asylum application, but a federal judge in Chicago granted his request, and so Yee was allowed to stay.

For the next year, he toured the "conservative" free speech circuit, shocking audiences with his radical, even licentious, criminal views on speech. He became an actual advocate for pedophilia! Disgusting, but true. He even shared that people should be allowed to threaten immediate and immiment violent threats. The United States has a very liberal policy when it comes to freedom of speech, no doubt. Mr. Yee would not have faced prison time for writing vile things about different religions or the founders of any country. 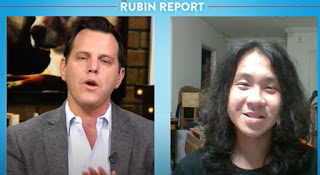 Here is his interview with Dave Rubin. Click here.

However, even the United States, whether in state or federal statute, does not permit individuals to make immediate, provocate, dire violent threats against others. Such threats are indeed taken very seriously.

The greatest alarm comes from his active, flippant, extremely disturbing endorsement of pedophilia. He actually argued that child can consent to sexual relationships with adults, and that such relationships should be legal. So-called conservative influencers and commentators, like the ones above, gave him free access to spew his views. Frankly, freedom of speech is essential for hashing out views and for allowing people to critique and challenge ideas and ideologies that they favor or disapprove.

Yet the situation with Amos Yee was different. By the time he arrived in the United States, he had become an adult. But before then, as a minor, he had been proppped up in all kinds of ways, enabled to speak his mind, to speak evil of dignities, to defy mores and traditions. Many activists on the cultural and political left celebrated this twerp.

But I sensed what a number of people also shared with me on an individual basis: this Amos Yee child was a very troubled young man, to say the least. He was clearly very bitter, angry. He wanted to lash out at all authority. In his interview with Dave Rubin, he was still a minor living in Singapore. His mother was busy doing housework behind the scenes. Where was his father? Did either of his parents have enough sense to discipline their child and teach him manners, to respect the laws in his country--or at the very least, prepare him for the legal fallout for expressing his views?

When one considers all of the above questions and factors, it's pretty clear that these social media influencers just wanted to cash in on the latest "free speech" craze, nothing more. It is really troubling, since this young man really need help, not enabling.

And the enabling turned into a very disgusting, criminal outcome.

Amos Yee was arrested last year for soliciting sex with a minor. He faced multiple counts, a high bail amount, and a very long prison sentence should he found guilty in a court of law.

Here's a complete run-down of the charges that he faced:

Yee was charged with child pornography and grooming after he allegedly exchanged nude photos and “thousands” of messages with a 14-year-old girl while living in Chicago back in 2019.

They met in February that year over the Riot chat app.

Not only did he send her nude photos, Yee also asked for nude photos of the girl over Whatsapp, and got them. He also persuaded the victim to appear on video and other mediums, which is why he was handed a charge of child pornography.

Child pornography, folks. This is not a joke. This is not funny. And he was sending out warning signs for at least two years during his stay in the United States. He actively and repeatedly endorsed sex with children. Does anyone find it surprising that he wanted to engage in such unseemly behaviors himself?

How could free speech advocates sit idly by and let him pontificate like he was some kind of free speech hero? He was a free speech miscreant, more or less, and had serious emotional, mental, and character issues, to say the least. He needed some real discipline, not people who allow him to dish on just about anything.

Earlier this year, he ultimately plead guilty to two charges of child pornography and grooming. He will serve six years in a federal penitentiary, then most likely be deported back to Singapore, where he will most likely face more jail time for reneging on his citizen-based duty to serve in Singapore's national service for two years full-time.

This is really tragic. When I learned about the final plea deal, I was sickened and outraged. All the adults in Singapore and the United States who were dancing around this guy, celebrating him and holding him up as a role model for full freedom of speech, were in reality hurting him and leading to harm against other people, too. Indeed, it's necessary and proper for citizens in their respective countries to fight for freedom of speech. I do believe that countries should take every step they can to ensure freedom of expression.

However, Amos Yee was the wrong vehicle for doing so. He was a troubled youth who needed help, and adults--who are supposed to be adults and put the needs of children first ahead of their own desires--used him to get views, likes, and to broaden their own appeal as "woke" activists for fighting repressive authority or pushing the limits of permissible expressions of speech.

I must say, I don't think I have ever felt so outraged, so angry about a situation as this one. There is so much wrong with what happened her: bad parents, selfish commentators, a corrupted media culture invested in shock and awe rather than truth and true advocacy--and in the midst of it, a troubled kid who became a troubling young adult who troubled other kids.

All of this was preventable. Shame on every adult who did not step up and push back on Amos Yee's perverted insolence. They could have saved his life, and at the very least ensured he had a life worth living. It's disgusting that adults, both in Amos Yee's home country and the United States, enabled and celebrated this creep for his "free speech" antics. All the while, he was an active advocate for pedophilia and other sexual perversions, along with other communistic ideologies. Where are all the anti-authoritarian free speech advocates now? They enabled this troubled young--now a troubling adult. This whole affair really outrages me. It's such a tragedy that a kid with such intellect could turn into a troubled adult with a criminal record, and no one stepped up to stop him when they had the chance.