I am really tired of Torrance politicians who preach "let's put aside partisanship" and "Let's be united," when at the same time they have not just a disagreement, but an intense dislike for anyone who does not vote for the same presidential or state candidates as they do.
Check out what Jean Adelsman, who is running for Torrance City Council, and what she really thinks about voters who voted for Donald Trump, for example.
It's not just her partisanship that is a problem, but it's the rank dishonesty that really rankles me. She is a definite NO for serving on the Torrance City Council. 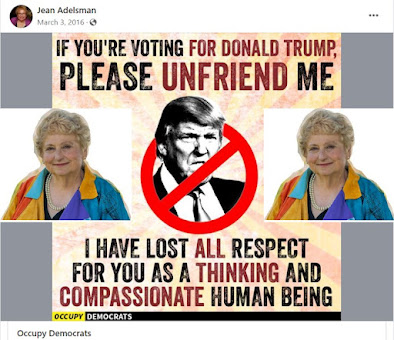 At first, there doesn't seem to be a problem. For her campaign, she is making a bold case for getting past partisanship and urging people to focus on local issues that everyone can agree on.

But is that really true?

Here's her claim about unity and supposedly wanting to end partisan gridlock:

What is the power of purple?

Partisan divisions are tearing our nation apart.  Even at the local level, the battle between team red and team blue rages on.  The consequences are political gridlock and people not being served by their government.

It’s time to stop focusing on what we disagree on and start working on the things we have in common.  We all want safe and clean communities, great schools, a healthy and vibrant economy and a local government that is responsive to its residents.  We want to make Torrance an even better place to live, work and play.

When red and blue come together you get purple, and you get the power to succeed on the things that matter most.  This is how I plan to work on the Torrance City Council, bringing people together to get good things done.

She says now that she is all about bringing people together.

But what did she think of President Trump when he was running for office?

Here are some posts from her Facebook feed (all of which have been recently taken down, for some reason ...) 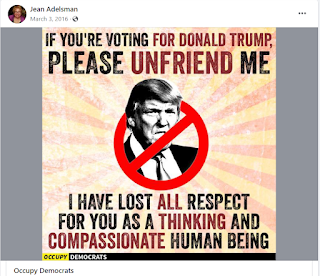 She posted this during the height of the 2016 election.

"Please unfriend me" Jean declared bluntly to the public, if anyone in the public voted for Donald Trump.

This goes beyond whether she likes or dislikes Trump. That's one thing.

But for her to say "Go away" to anyone who voted for Trump (or any other Presidential candidate that she may not have supported, for that matter) ... that goes against everything that she claims to stand for today.

For the record, I have friends who voted for Hillary Clinton, Bernie Sanders, Joe Biden, Jill Stein, other candidates who were running for President in 2016 and 2020. I have friends to this day who had voted for Barack Obama in 2008 and 2012.

I would never cast off a friendship simply because someone voted for a Presidential candidate that I did not support.

But Jean Adelsman, who claims to be all about unity, wants to brush off, cast out anyone who voted for Donald Trump--and then she took the posts down from her Facebook page. The fact that she would hide such brazen partisanship is deeply offensive, insulting even.

Hypocrisy, thy name is Jean Adelsman.

What's really disturbing is that she shared a post that comes from "Occupy Democrats," which is one of the most partisan, progressive (unlike Torrance) organizations in the country.

Bear in mind that many people consider Wikipedia to have taken on a partisan bias. Yet even with that taken into account, the fact that even writers and contributors to Wikipedia find "Occupy Democrats" to be hyperpartisan should cause all of us some concern.

And encourage us to confront Jean Adelsman on her dishonesty.

Here's another post, that should tell you all about Jean's true sentiments: 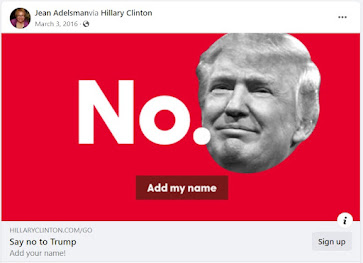 "Say No to Trump," she shares. Does that also mean "No" to people who voted for Trump, as well?

She apparently didn't pay attention to what happened in Virginia earlier this year, in which three Republican statewide candidates won over Democratic as well as Republican voters to get elected, even though the state had been trending Democratic for the last ten years.

What happened? Governor-elect Glenn Youngkin and his team reached out to voters based on the issues that they cared about. They did not disparage voters if they supported Joe Biden or President Trump in the 2020 General Election.

And yet, here we are with Jean Adelsman, who wants to serve on the Torrance City Council, pushing this pretentious plea for unity and bipartisanship, when all the while she harbors a hatred of Trump and for people who voted for Trump.

Jean Adelsman does not meet that standard.

Dishonest Jean is a No for me.

Posted by Arthur Christopher Schaper at 10:24 AM