Evangelism is About Revelation, not Reason 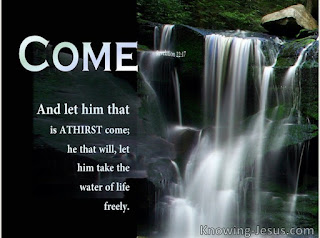 Last night, while I was visiting the Del Amo mall, a young man walked up to me.

His name was Anthony.

He started talking to me about Jesus Christ. He wanted to share the Gospel with me. I had no problem with him talking to me, since I had announced at the outset that I believe in Jesus, that He is my Savior, and I am so grateful for all the blessings which He has--and is--lavishing on me.

He began rattling off a number of Scriptures, including key passages in the Book of Revelation. He showed me passages about the Spirit and the Bride, and how they both invite us to draw from the Water o Life:

He then asked me "What does the water of life represent?"

I said "The Holy Spirit." and I referenced this verse in the Gospel of John:

"37In the last day, that great day of the feast, Jesus stood and cried, saying, If any man thirst, let him come unto me, and drink. 38He that believeth on me, as the scripture hath said, out of his belly shall flow rivers of living water. 39(But this spake he of the Spirit, which they that believe on him should receive: for the Holy Ghost was not yet given; because that Jesus was not yet glorified.)" (John 7:37-39)

He then mentioned the account of Jesus with the woman at the well in John chapter. I agreed.

He then asked me whether I had the Holy Spirit or not. I shared with him: "Yes, I do."

He then asked me: "How do you get the Holy Spirit?"

I told him that because I believed in Jesus, I have received the Holy Spirit.

He seemed perturbed somewhat, that I had answers to many of his questions. It really showed how disrespectful he was, that he refused to listen to me at the outset, that I had said that I am a Christian, and that I believe in Jesus Christ.

At that point, I asked him which church he belonged to. I was starting to wonder if he was a Seventh Day Adventist or a Mormon, or a member of the so-called United Church of Christ, which denies the full deity and pre-eminence of Jesus Christ.

The discussion then veered to how people need to keep the law of the New Covenant. He pointed to the passage in which Jesus took the cup of blessing at the Last Supper, and He declared "This is my blood of the new and everlasting covenant."

I was really disturbed when he said "Law" in relation to the New Covenant. I began to interrupt him, but gently. "We are no longer under law. We are under grace. You can find this in Romans."

He would not let me finish. He then stood up, said to me "You are a lawbreaker," and he walked away. A simple rush of peace came over me. I did not lose my temper, I did not raise my voice. Before he walked away though, I chided him, "Why will you not let me speak. I have allowed you to speak, haven't I?"

At that point, he called me a "lawbreaker," and he left. He did not get the answers that he was hoping for, I suppose. He had probably been trained that he would force me into an intellectual corner and cause me to acknowledge that I am a sinner or something else. He was hoping to win me over with a clear decision for Jesus.

What was really striking about his evangelism, if one can call it that, is that he did not mention the name of Jesus even once. He did not give the impression that he even knew how Jesus is!

While that dialogue between Anthony and me had been taking place, there was another gentleman, an older man, who was watching. When Anothony walked away, he laughed and asked me "What was that all about?" I told him how he was trying to share the Gospel with me--although the reality is that he had no good news to share, since he wanted to bring me back under law, and did not mention grace once.

He then remarked: "Wow! That's so sad. He was upset that you are religious, even though he was trying to make you religious. One would think that he would be happy for you!"

He was not interested in helping me. He was interested in "winning a convert," or at the very least winning an argument. That is not true evangelism.

I must admit, however, that I waded into this similar fight for pre-eminence with the older gentleman who started speaking with me afterwards. He told me that he is not religious, and he believes that there are too many inconsistencies with belief, plus all the complexities in the world, for him to believe that there is a God.

I insisted on asking him some questions. He clearly was not prepared to articulate his views on the issue. He wanted to defend evolution, and I asked him the usual questions which set such thinking to naught, such as "where is the evidence?" I also asked him "Where in the fossil record does one find the transitioning species?"

I felt the Lord telling me "This is not the right time to share with this man. This is not the approach to sharing the Gospel with him." Still, I pressed him a few more times on a couple of questions about the origins of the uinverse, how everything came about if not by intelligent design. Then, it seemed as though he had to take a call, and I took that motion as my cue to walk away.

As I walked away toward the center of the mall, I realized a number of things. I used to be an agressive evangelist like Anthony. I had a set of questions that I would press on someone, and then I could turn the whole situation around on them to say "You are a sinner, and you need a Savior. Would you like to believe in Jesus Christ and let Him be Lord of your life?"

Back then, I was so interested in winning arguments based on intellect. Today, I realize that Jesus is not just real, and real to my experience, but that He is more than a nice thought or a sentimental result of our reasoning.

Jesus is alive! He is a person! And evangelism should be all about sharing a great revelation of how great He is in our lives. We should be talking about Jesus the same way that we talk about a loving friends, relative, spouse, i.e. someone whom we know intimately, and whom we want others to know intimately, too!

Evangelism is about sharing the Good News, and that Good News is summed up perfectly in Acts 13:

"38Be it known unto you therefore, men and brethren, that through this man is preached unto you the forgiveness of sins: 39And by him all that believe are justified from all things, from which ye could not be justified by the law of Moses." (Acts 13:38-39)

We receive forgiveness of sins--all our sins. We are justified from all things, that we cannot receive by the law of Moses.

I did not understand the Gospel in this fullness at all. I had understood the Gospel as something so work-centered, so "I" centered. How sad it is, yet so true. No wonder I was not much of a witness in years past!

Today, I understand fully God's unmerited favor, which I receive through Christ Jesus. Today, I know that He is my life, my Savior. I am connected to a real Person, not just some figment of my imagination, or a set of principles or verses.

"Herein is love perfected among us, that we may have boldness in the day of judgement: because as He is, so are we in this world." (1 John 4:17)

Today, I am learning so much about how to let that River of Life flow through me uninterrupted, unhampered by my efforts. I am learning that to share the Gospel is as simple as declaring: "Jesus Christ has died for all your sins. You can receive full freedom from condemnation and receive His life!"