He lives near the Torrance City Hall, and he was telling me that a large group of Black Lives Matter protesters were walking down the street, and they were stationing themselves outside of city hall.

Black Lives Matter has been harassing the Torrance City Council and the residents in and around the city for the last year and a half, since Christopher De'Andre Mitchell was shot by Torrance police officers for refusing to follow orders, after he was caught in a stolen vehicle with an air rifle at his feet.

For a year and a half, BLM protesters have been showing up, barraging the city council with demands for a civilian oversight commission, for lots of money, and for the two police officers who shot Mitchell to be fired.

The LA County District Attorney declined to prosecute the two police officers, and no one should be surprised. The police officer took the measures that he took because Mitchell looked as though he was going to reach for the firearm at his feet. It was a very tense situation in the video.

A year and a half of this abuse.

Last year, BLM protesters took over the city council chambers a number of times. On May 7th, 2019, they stood in the center of the chambers holding hands. They announced empty slogans like "We have the right to fight for freedom!'

Freedom for themselves? Freedom for whom? Definitely not for the residents of the city of Torrance. Definitely not for the stakeholders. Then came May 14th, 2019. I tried to speak at the podium, speaking on behalf of the Torrance police officers and detectives who went to every length to find the murderer of the four black lives who were gunned down in the Gable House Bowl two weeks prior. Instead of respecting those black lives, the BLM haters shouted me down and forced the mayor to recess the meeting and clear the room.

That time, the police officers took out their batons and forced the BLM protesters in the city council chambers to leave. Four of them were arrested, and then a fifth one, Evan "Fake Priest" Bunch was also arrested, since he assaulted me, damaged my property, and threatened my life.

Black Lives Matter protesters met at a local park. They walked together in a large group blocking traffic on the different streets. They walked up to Crenshaw Blvd. and then walked along Torrance Blvd until they got in front of Torrance City Hall.

Instead of protesting peacefully on the sidewalk, however, the BLM mob took up the street. Yes, they stood in the street and blocked traffic. Instead of removing the protesters or having them arrested for trespassing and blocking traffic, the police officers blocked off Torrance Blvd. between Maple Ave and Madrona Ave.

What is this madness?! This is total lawlessness. They have a right to protest, but they do not have a right to take up the street and block traffic. If they wanted to stage a parade, then they needed to obtain a permit, which apparently they had not done.

I contacted the Torrance Chief of Police, Eve Berg.

Here's the first email that I sent to her and to the Torrance City Council:

I understand that Black Lives Matter (BLM) protesters lined up and demonstrated in front of City Hall last night, June 23, 2020.

I have also learned from a number of residents who live across the street from the Torrance City Hall that the BLM protesters not only arrived in front of city hall to protest (which is their First Amendment right), but that they walked from one of the local parks, up Crenshaw Blvd in the streets, and then stopped in front of City Hall -- BLOCKING TRAFFIC in the process.

I understand furthermore that the police department was ordered to block traffic from entering eastbound and westbound on the street between Madrona and Maple Ave, in order to enable the protesters to stand in the street.

They do not have a right to do that. That is not peaceable assembly at all. Such actions violate the rights of every individual who wanted to travel on Torrance Blvd. Such actions are not protected as part of the First Amendment.

This is an appalling abuse which these protesters engaged in, and a complete dereliction of duty from the city leadership to permit this to take place.

I demand answers, accountable, and action to correct this lack of authority. We cannot allow these individuals to break the law in the name of social protest.


I then sent the Chief of Police a specific letter:

I would like to meet with you regarding the ongoing BLM protests and disruptions that have become a near-constant nuisance.

I did not receive a response from you regarding the email that I sent to you last night.

I am more troubled about the current response from city leadership, and I am interested in knowing what steps the police department is taking to ensure that First Amendment rights AND freedom of travel and movement are respected.

If you are not available, I have no qualms about speaking with the next available representative or officer who can speak on your behalf.

She eventually responded to my second email:

Thank you for your email.

In complying with COVI19, I am unable to meet with you in person at this time.  Therefore, I will address your concerns in this email.

In regard to your previous email, I want to ensure you that I made all of the operational deployment decisions based on the conditions and circumstances that were presented during the dynamic and fluid situation on the night of June 23, 2020.  No one from council ordered the officers to block traffic or whether or not to arrest anyone. As the Police Chief, and in conjunction with the Incident Commander’s updated briefings, I monitored the entire incident and made decisions accordingly.

The police department is acutely mindful of First Amendment rights and consistently takes steps to ensure that those rights are adhered to as well as respected.

I hope this email has successfully addressed your inquiry.  If you should have any further questions or need more clarification, please don’t hesitate to call me.

For the longest time, I had believed that it was Mayor Furey who was directing the chief of police and the police officers to stand down, to let the BLM brats get away with disrupting the meetings in the city council chambers.

Then I received a phone call from the Chief of Police. She had called me this past Monday, but I missed the call. I called her back earlier today, then she called me. At least we did not have to play phone tag this time.

She told me that yes indeed the BLM protesters blocked Torrance Blvd.

She made the call to let them block the street, and thus to close the street to traffic for everyone else between Maple and Madrona Avenues.

She acknowledged that "the buck stopped with her" when it came to the operational decisions and actions taken by the police.

I was unsparing in my criticism of the Chief of Police. I hammered home to her a number of times: "That was not acceptable!"

The chief of police actually claimed that Trump rallies had included people who were standing in the street and blocking traffic. That it a total lie. I have been to at least three rallies in the city of Torrance in the last three weeks, and not once did anyone block traffic.

There is no comparison to the peaceful rallies which residents of the city have engaged in, compared to what Black Lives Matter has been doing in the city of Torrance for the last year and a half.

The chief then insisted that it was her job to serve and protect the community, and to make sure that no one was hurt.

That is a nonsense argument. Lawlessness and willful disregard for the rights of others is creating more lawlessness, undermines the rights of others to attend city council meetings, to speak out on issues, to have their concerns heard. The BLM movement has shut down the city council meetings a number of times, depriving other individuals of the opportunity to attend the meetings and be heard, as well.

I asked her point black: "Are you saying it's OK for someone to rob my house, as long as I am not in the house, and therefore would face no risk of getting hurt?!"

She pushed aside my argument, pointing out that there is a difference between blocking traffic and stealing from someone's home. Granted, but the notion that the police should not get involved in stopping crime or disruptions or violations of other people's rights just because someone isn't "harmed" is quite a disingenuous argument.

I also pressed the chief of police about CCWs. She is responsible for deciding who gets a CCW, and she stated that the individuals cannot have a felony on their record, they have to undergo a background check, and they have to show good cause. That last part is particularly unconstitutional. There is no better cause than self-defense, not just from criminals and potential threats but an overreaching government.

I was astounded how she justified allowing the BLM protesters to break the law, to disrupt traffic, to violate the rights of others. She refused to give any full justification for the reason for allowing the disruptions, but simply stated that the conditions and circumstances warranted allowing BLM to block the street in front of city hall.

The truth is this: bad behavior simply breeds more bad behavior. Allowing these miscreants to disrupt the rule of law, to undermine the rights of others, to violate the clear strictures of the First Amendment -- all of this is simply unacceptable.

I asked the chief of police one last question: "When are you submitting your resignation?" 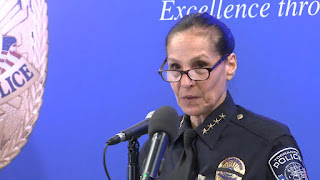 It's time to demand Eve Berg, the Chief of Police, to stand down. She refuses to do her job. She has refused to uphold the rule of law and to defend the rights of the residents, the citizens in the city. She is allowing BLM protesters to get away with all kinds of lawlessness, both within the city council chambers as well as without. There is no excuse for this dereliction of duty!

Demand that they start upholding the rule of law and bring regular order back to the city council chambers and the city as a whole.