Black Lives Matter is a hate group. If you don't believe me, check their website.

You can also hear their hateful chants against the police, law enforcement in general, white people, Jews, Israel, and black people who think for themselves.

They are already doing their best to fight back against their growing exposure in the general public. As more people realize what Black Lives Matter is really all about (and it's not about black lives), the more that these groups are genuinely and roundly repudiated.

The group that has formed in El Segundo is trying to distance themselves by calling themselves "El Segundo for Black Lives".

It makes no difference. They are just another iteration of "Black Lives Matter", nothing more.

No one should fall for this fraud.

Some racist, uppity white liberal outsider named Amanda Touchton moved into the city of El Segundo looking to cause trouble in the wonderful "Mayberry By the Sea" community.

And now, Black Lives Matter El Segundo is going around the city, pressuring the city council and the school board to enact a set of unreasonable, immoral policy demands which have nothing to do with good governance or well-being in the city.

In fact, this group wants to give off this narrative that El Segundo is some essentially racist city that needs to repent of its long-standing sins. Residents of diverse backgrounds who have lived in El Segundo for decades can attest that the city is indeed quite welcoming.

On the other hand, Black Lives Matter El Segundo activists are anything but tolerante. They have twisted Scripture, they have cast shameful aspersions on a welcoming city. They disparage the police department and its other civic agents.

And check out an average member of the Black Lives Matter El Segundo group: Ben Lourey 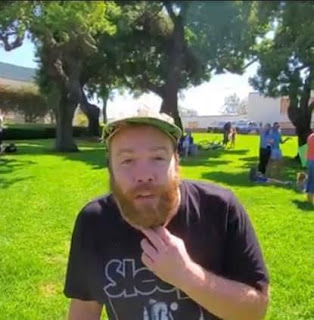 This video contains my first interaction with him in its entirety.

He called me a kook, a racist, and other abominable names.

He got close to me, then told me that I had to engage in social distancing from him. He got in my face, but wanted to make it my fault that I was not six feet away from him. Give me a break.

When I called him out and the entire Black Lives Matter movement for not caring about black lives at all, he became enraged and indignant, and began shouting other hateful messages at me. At one point, he made it clear that he did not care about the black lives that get gunned down in Chicago. Wow! Such hypocrisy, and such bitter vitriol.

This is Black Lives Matter, folks: mindless bigotry hell-bent on virtue-signaling how "woke" they are compared to everyone else.

Watch the video for yourselves, and you will see that this movement is not about love, tolerance, and inclusion. This is just a part of a larger, militant, abusive agenda, and now it's targeting El Segundo to commit greater harm against others. This cannot be tolerated!

California MassResistance is committed to fighting back against this scourge and abuse of power in El Segundo, throughout Los Angeles County, and throughout California and the United States as a whole.