Analysis: The US Supreme Court ruling on Bostock v Clayton County: What you need to know about it – and what we must do now.

Yes: We need to start actually resisting. This ruling is not law.

These men came to the Massachusetts State House in 2009 to lobby for a bill that would have forced all businesses to allow active "transgender" employees. Now the US Supreme Court says they can become "waitresses" at your local restaurant or kindergarten teachers at your children's school. [MassResistance photos]
“To restate what was once self-evident to everyone, including most homosexuals themselves: men using one another as women constitutes a perversion. To my unreconstructed mind, this is as true as ever; and so far as I am concerned, it would still be true even if gay sex no longer entailed the danger of infection and even if everything about it were legalized by all 50 states and ratified by all nine Justices of the Supreme Court.”
- Norman Podhoretz, Commentary Magazine, November 1996
Title VII of the 1964 Civil Rights Act prohibits discrimination in the workplace on the basis of sex, among other things. Yesterday, in Bostock v Clayton County the US Supreme Court ruled 6-3 that “sex” also includes homosexuality (“sexual orientation”) and transgenderism (“gender identity”). Thus, all companies must now allow openly homosexual or transgender employees – and can be sued for “discrimination” if the employees don’t receive the treatment they claim is their right. There are no “religious exemptions.”

What does this mean to citizens?

This ruling will create a storm of employment lawsuits. But make no mistake: It will soon go far beyond employment. The absurd legal redefinition of the word “sex” to include LGBT behaviors by the US Supreme Court will soon be used to legally force that horrific agenda into every realm of society (including, of course, transgender athletics, and restrooms).

Ruling took everyone by surprise

This ruling took virtually everyone by surprise. The case seemed like an easy decision about what “sex” means. No one seriously thought the US Supreme Court would go this far. It was similar to the 2003 “gay marriage” ruling by the Massachusetts Supreme Judicial Court – which even the “gays” didn’t expect.
Moreover, on three occasions since 2007, Congress has considered adding “sexual orientation” to federal non-discrimination laws. But no bill has passed both houses. So instead, the Supreme Court, in true activist fashion, has decided to ignore the separation of powers and act on its own.

How did our legal system get to this point?

If we honestly look at this ruling from its logical beginning, it shouldn’t be too surprising that we’ve reached this point. This is only the latest phase in the left-leaning government officials’ re-shaping the Constitution for their own social-justice ends.
Let’s start with the 1964 Civil Rights Act, which is the focus of this ruling. Though well intentioned, it was clearly unconstitutional, as various prominent members of Congress explained at the time. For example, Senator Barry Goldwater was sympathetic to the aim of the bill. He was a founding member of the Arizona NAACP and helped integrate the Phoenix public schools and the Arizona National Guard. But he voted against it.
Goldwater (and others) insisted that according to the Tenth Amendment, the federal government has no legal right to interfere with whom people hired or fired or to whom they sold their products. That “power” lay with the states, and with the people. From a constitutional standpoint he was correct. But the emotional momentum of the time was in the other direction. 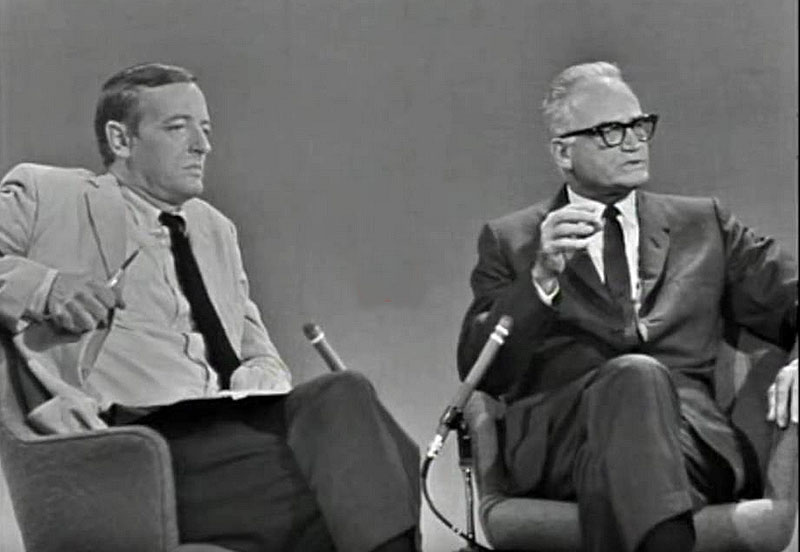 Senator Barry Goldwater (right) appeared with William F. Buckley on Buckley's show "Firing Line" to explain why he voted against the 1964 Civil Rights Act.
Originally, the word “sex” was not even in the 1964 Civil Rights Act. It was added to the bill near the end of debate as a “poison pill” by Southern Dixie Democrats. They hoped that including “discrimination based on sex” would make the bill offensive to most legislators and get it killed. But that didn’t work and it passed anyway. And the Civil Rights Act has opened the door to Congress passing into law whatever other nationwide social agendas it wants, generally ignoring any constitutional restraints in the process.
(Later, Phyllis Schlafly rightly fought against the “Equal Rights Amendment” because she understood how the word “sex” could be twisted in the future. We now see how prescient she was.)
Moreover, in 1964, homosexuality and transgenderism were deemed mental illnesses by every medical organization in the world (as they had been since at least the founding of our Republic). Those standards were not changed through any scientific inquiry, but through brutal campaigns of threats and intimidation starting in 1973 against medical authorities.
Furthermore, the world’s major religions consider homosexuality and transgenderism as out of moral bounds (as the Bible says, “abominations”). All of America's founders were religious and understood that a Republic could only last if its citizens were God-fearing. (Unfortunately, on the US Supreme Court, only Justices Alito and Thomas appear to be now.)

This week’s bizarre US Supreme Court ruling didn’t happen in a vacuum.
The Court was never meant to be a powerful unelected body that creates and shapes laws for the country through its rulings. It was meant to be the least powerful branch that adjudicated between disputing parties. But over the years Americans have allowed it to usurp enormous power (without fighting back) – and we are living with the consequences. The Justices are now ruling without restraints.
Recent prominent examples of this judicial overreach are:
All of these rulings arrogantly pushed a leftist social agenda by distorting the Constitution to a point where it became unrecognizable.

For decades, the mainstream conservative movement has meekly allowed the political and legal establishment to frame “culture war” issues in their own distorted ways. In fact, the conservatives usually participate in it and become part of the problem.
For example, we all recognize that there are males and females, blacks and whites. But in truth, there is no such thing as “gay Americans” or “transgender Americans.” There are Americans with homosexual problems, and Americans with gender-identity psychological dysfunctions. But those “orientations” or “identities” are political inventions of the LGBT movement. However, our side rarely challenges these radical concepts, but instead goes along with the charade. So the legal and political system has an easier time going forward with it.
And it appears that none of the “conservative” lawyers in this case brought up the obvious glaring Constitutional problems with Title VII of the 1964 Civil Rights Act and similar legislation. Why not? Conceding that gave up a huge part of the case.

Was the 2016 election the beginning of the era of a sane US Supreme Court? We all hoped it would be.
But President Trump’s “conservative” Supreme Court judges have been a big disappointment, to say the least.  They were, of course, recommended to him by prominent conservative groups such as the Federalist Society, which is as mushy as mud on pro-family culture-war issues.
Justice Neil Gorsuch not only voted for this ruling; he wrote the majority opinion. Recall that Gorsuch was touted as a conservative Constitutional “originalist” – one who pays close attention to the original intent. Well, not so much. If you read his majority opinion in this ruling, you will see pages and pages of utter nonsense as he vainly tries to weave a convincing legal argument out of illogical mush. It’s not even worthy of a serious analysis.
Of course, Gorsuch actually comes by his prevaricating ways honestly. As many of us observed when he was nominated, he was a member of a far-left pro-LGBT Episcopal church whose female pastor officiated “gay” marriages, according to press reports. (We wonder how Gorsuch will handle it if his daughters have disturbing encounters with "transgender" boys in their locker rooms.)
We were also betrayed by Chief Justice Roberts who voted for the ruling.
And then there’s Justice Brett Kavanaugh. Even though Kavanaugh voted the right way on this, he wrote his own dissent that concluded with this frightening tripe:
Notwithstanding my concern about the Court's transgression of the Constitution's separation of powers, it is appropriate to acknowledge the important victory achieved today by gay and lesbian Americans. Millions of gay and lesbian Americans have worked hard for many decades to achieve equal treatment in fact and in law. They have exhibited extraordinary vision, tenacity, and grit-battling often steep odds in the legislative and judicial arenas, not to mention in their daily lives. They have advanced powerful policy arguments and can take pride in today's result. Under the Constitution's separation of powers, however, I believe that it was Congress's role, not this Court's, to amend Title VII. I therefore must respectfully dissent from the [ruling].
In other words, Kavanaugh fully believes that the false concept of “gay” and “transgender” identities should ultimately be part of our laws. We can see what’s coming down the road in future rulings. And he’s one of the “conservatives.”
The other two voting against the ruling were Alito and Thomas.

Where do we go from here?

As columnist Daniel Horowitz observed today, “The ‘conservative’ legal movement, which has promoted the idea of ‘appointing better judges’ rather than fighting the entire concept of judicial supremacism, has failed miserably. This was its Waterloo.”
It’s time to adopt a completely different response to this crisis. The long string of abuses perpetrated by the Supreme Court – on prayer in the schools, abortion, sodomy laws, “gay marriage,” and now this – must be defied by citizens, their local governments, and by the states.
We must stop agreeing with far too many so-called “conservatives” who insist that Supreme Court rulings constitute “the law of the land.” There is nothing in the Constitution that remotely indicates that. The courts give opinions and rule in specific cases between disputing parties. Only Congress creates the law of the land.
We must constantly confront all judges at all levels who ignore the laws and Constitution, and simply concoct rulings to please their personal “social justice” yearnings. Impeachment, a constitutional remedy, should become part of the solution.
We must confront, in whatever matter we can, unconstitutional laws. The US Constitution was meant to work through every person – each legislator, judge, and citizen – following the laws and Constitution on his own. It was not meant that legislators would pass whatever they wanted, and then leave it up to the courts to decide what was actually constitutional.
Should bad laws and US Supreme Court “rulings” that are clearly and unambiguously unconstitutional be blindly followed? Maybe not.
Here’s the sort of defiance that there must be more of:
We’ve often said that Judge Roy Moore is the greatest pro-family figure since Phyllis Schlafly. After the ridiculous Obergefell ruling, Judge Moore (as Alabama’s Chief Justice) ordered the state’s probate judges to obey the state Constitution and refuse to issue same-sex marriage licenses. He had earlier placed a Ten Commandments monument in his court building, despite phony “separation of church and state” orders by another court.
Because of that, Judge Moore was hated by the Republican establishment, who stood by and watched as he was hideously vilified by the Left when he recently ran for US Senate in Alabama. He would have been their worst nightmare as a US Senator, boldly standing up for the truth in that political cesspool.
Don’t despair. Don’t give up. Begin fighting back.
In our daily lives, as much as possible, we all need to say NO and do what is right – and confront our officials and judges to do what is right. That is the direction MassResistance is taking – especially regarding this latest ruling. We will be discussing more of this in upcoming articles. If enough people get involved, amazing things can happen!

Please help us continue to do our uncompromising work!
Our successes depend on people like you.
Donate to MassResistance
Your support will make the difference!
Posted by Arthur Christopher Schaper at 12:40 PM