I had had to spend some time thinking about this development surrounding this "MAGA Drag Queen" coming forward to speak out against Drag Queen Story Hour. My focus is on the promotion and normalization of a drag queen as a spokesman for promoting a conservative, pro-family value.

I am glad that a drag queen is openly admitting that the whole drag culture is saturated with sex, drugs, and alcohol. It's an abusive, adult scene which children should have nothing to do with. 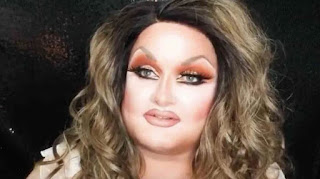 Kitty Demure, whose real name we do not know, shared the following:

“What in the hell has a drag queen ever done to make you have so much respect for them, and admire them so much?” asked Demure, “other than put on makeup and jump on the floor and writhe around and do sexual things on stage?”

He, Mr. Kitty Demure, forgets to mention, that drag culture is overwhelmed with sexual degradation and debasement. He forgets to mention that predominantly men in bondage to same-sex lusts are involved in this whole perversion. Her certainly forgets to make the point that kids should not get involved in homosexuality, transgenderism, or other paraphilias burning within the LGBT dumpster fire. 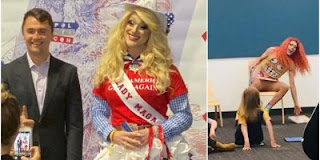 Furthermore, I am deeply disturbed by the fact that TPUSA, (and Conservative Inc in general) once again want to normalize this whole Drag Culture in the sense that they are offering this man a platform to share his opinion at length.

Drag Queens are not for kids. Guess what? WE KNOW THAT ALREADY!

I will go one step further.

We should not start parading "conservative" Drag Queens as if they are heroes because they are telling us the down-to-earth obvious. OF COURSE Drag Queens are not for kids! Kitty Demure makes a point, sure, but so have many of us in MassResistance and in other pro-family movements. Kitty Demure is getting fifteen minutes of fame because a gay "conservative" is making the same case, and therefore his opinion somehow has more value. Wrong. 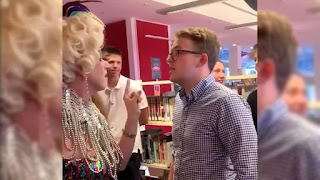 A few weeks ago, Wilson Gavin (God bless that young man) joined with his conservative college friends to protest a Drag Queen Story Hour in the local library. They were not trying to convince the drag queen at the Brisbane library that Drag Queens are not for kids. He and his fellow Liberal college students (the conservative party in Australia is called "Liberal") were opposing the filthy man, to prevent him from getting access to the kids in the first place!

Furthermore, Wilson Gavin opposed gay marriage and the full-on normalization of LGBT behaviors and ideas in the general public. These are the people whom we need to recognize and imitate, not just appreciate.

And you know what? We need to stop promoting drag queens in general, and we need to stop promoting LGBT "conservatism" in particular. If individuals are struggling with same-sex temptations or gender dysphoria, they can advocate for conservative causes, but why are they celebrating a so-called LGBT "identity"? That is wrong. Consider this: Wilson Gavin was dealing with same-sex temptations. He didn't go around calling himself "gay conservative" to the best of my knowledge, nor did he expect people to praise him for not acting on his feelings. He recognized the struggle, but spoke out against the advancement of the LGBT agenda. That's what really matters: not this petty identity politics nonsense to expand the number of people telling everyone else the obvious.

On a larger note, we need to stop allowing sexual deviants who espouse some conservative talking points to then promote themselves and thus normalize their perverse lifestyles. There are conservatives who eat too much, drink too much, lose their temper without warning. We don't celebrate their personal failings, do we? Why then are we celebrating drag queens who tell us what we already know about drag culture to begin with?

Because of my viral video, I have been asked to travel and be part of a discussion panel to discuss LGBTQ issues with mothers in a town that is having an epidemic of gender confused kids. I have never done this before. I am also being asked to do many interviews. THIS IS REAL!
— Kitty Demure (@demure_kitty) January 23, 2020

This is more grifting, nothing more. Why are we putting gay or transgender people on pedestals for stating the obvious about sexual perversion around minors?

The reason why Drag Queen Story Hour is not for kids is that drag queen entertainment is illicit to begin with. The moment that conservatives begin normalizing LGBT behaviors among adults, and then divert opposition only to keeping it away from children, there will come a point where they will no longer have any argument to keep such filth away from children.

Gender confusion is occuring because there is so much confusion about truth, fact, and reality. All of this sexual confusion must be confronted with uncompromising truth. It's time to: