Pizza Hut is Dying: So What? 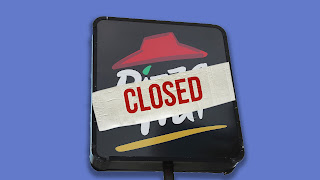 Jack Posobiec went on a Twitter storm about the decline and fall of Pizza Hut in the United States.

He also showed the flourishing franchise in China, compared to its slow, zombie-like decay in the United States:

Are you paying attention yet? pic.twitter.com/DhMml3wmx2

Posobiec fails to mention that tens of millions of Chinese are in unrelenting lockdown right now, as the Beijing Communist Government insists on pursuing a "No Covid" program. He also fails to mention that fast-food in general really isn't all that healthy or good for you. I should know. I used to eat out every day, and I drank the carbonated from the machines non-stop. All of that sodium and caffeine did a number on me.
When I was in high school, I went to the local Pizza Hut on Sepulveda and Hawthorne in Torrance after the football games. It was a pretty good time, hanging out with the other marching band members, and there were good times while hanging out there.
But then, as the months went by, fewer and fewer members of the band would go there. One night, it was just me, my sister, and another friend, and that was it. It wasn't much fun anymore.
The last time I went to that Pizza Hut, I remember how the tables were covered in trash, and how dirty the place looked. The current staff on site were not taking care of the place. On top of that, the cashier who took my order was really rude!
I was so digusted by the whole mess that I went up to the cashier and demanded my money back. She acquiesced, strangely enough, but asked for my phone number and signature when I got my money back. No big deal, since they never called me.
I never looked back since. I am not really all that into pizza, honestly, and it's no loss to me that I stopped going to Pizza Hut after that. In fact, so many people stopped going to Pizza Hut that that location closed down a few years later! Today, it's a Japanase-themed grocery store.
At any rate, I think that the Generation X-Millennial nostalgia for fast-food, video games, and good times needs to be tapered somewhat. Yes, there are many great memories from my high school years. But I would not trade my blessed todays for any of those good times from two or three decades ago. So glad for the good times that I had when I was playing with the Torrance High School Marching Alliance. But I am so glad that I have grown up, too, and I am doing other wonderful things.
Moreover, the larger consequences of these fast-food shut-downs is good for the United States, too. For too long, Americans have not been sitting around the table eating a home-cooked meal together. For too long, the kids in a family would go out and eat on their own, not spending any quality time with family or friends, or even next-door neighbors.
As I wrote above, I think it's a good thing that some of these fast-food chains are going out of business. The kinds of food they offered was never really that healthy, to begin with. The United States has been suffering with an obesity problem for at least twenty years. The crippling inflation, the woke corporate culture, the decline in objective standards is all working for good, in a way. People will stop eating so much food and getting all caught up in consumerism. The 1990s were good times, and those good times created weak men, and now weak men are facing hard times, so that they can become strong men.
On top of these silver linings, consider now that China is in big trouble. The culture is getting more consumerist, less dynamic. The rage of soy-boy culture and feminism has become such a problem, that the Beijing Government has begun cracking down on the unmanly madness. It's too bad the United States did not have a similar set of tools in place to accomplish similar cultural finessing for future generations.
To sum up, I do not share Jack Posobiec's bleak outlook about the decline and fall of Pizza Hut. The United States of America, her country and her people, need a spiritual revival, not more pizza. If we really want to get America back to "Makin' it Great," then it's time weak man to get through these hard times and let go of past nostalgic comforts.
Posted by Arthur Christopher Schaper at 9:13 AM