President Trump: Why Are You Silent on Sex Mutilation of Minors in Texas? 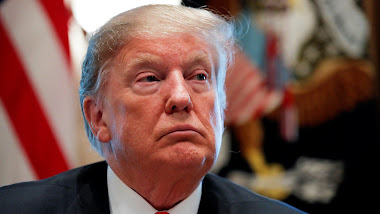 We understand that you are getting more involved in the local and state politics of the several states throughout the United States.

Good for you! I definitely see you as a qualified, unabashed king-maker in these very trying and tiresome times. We need leaders who will call out other leaders who refuse to lead.

It's time that conservatives and constitutionalists starting thinking bigger and making major gains at the local and state level, not just focus on winning at the federal level. Most reforms that capture the country start at the local and state level, anyway. Right To Try legislation passed in Congress because over 25 states had enacted state versions of this legislation, for example, and you signed off on that signature reform in 2017!

Constitutional Carry has become the law of the land in 21 states, and is heading perhaps to one or two more this year, and three more next year. The United States Supreme Court is ready to step in and assure that the right to keep and bear arms is not just a right to exercise inside one's home, but outside in one's country. We are glad to see gun freedoms become commonplace in the United States, while in other countries more citizens realize the essential necessity of defending oneself from a tyrannical government.

And now Election Integrity has taken on new momentum, although the changes and reforms needed to clean up voter rolls and ensure that only citizens vote should have taken place decades ago. Thank you for taking the lead on this.

Thank you, more importantly, for calling out RINO Texas Speaker of the House Dade Phelan on the issues of Election Integrity: 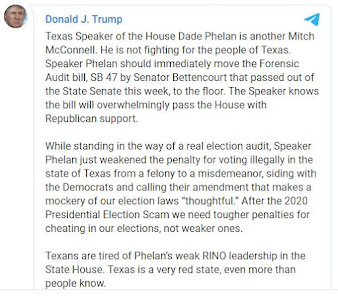 Indeed, Speaker Dade Phelan is another Mitch McConnell, a weak leader who wants to make nice rather than make a difference. Phelan is indeed a despicable RINO. He has allowed Democrats to retain key leadership positions in the state house, even though they vote against the agendas that Texans care about. He allows them key chairmanships on committees, even though they often frustrate the Republican caucus agenda time and again.

And for all those arrest warrants issued for the runaway Democrats who frustrated two special sessions earlier this year, not one of those despicable Democrats have been formally charged or sanctioned in the Texas State Legislature. In fact, Phelan allowed them to retain key leadership positions and their salaries, despite the fact that they refused to work for the people of the state of Texas.

Phelan delayed constitutional carry until it was too politically damaging to his power to continue to do so, and he finally caved to allow the immensely popular heartbill to pass, too.

However, the Texas Republican Party has established 8 legislative priorities, and Phelan only approved two of them. Two key priorities which Phelan killed? One is school choice. Texans have wanted to break up the Big Government "public" school cabal for decades. And yet, even though Republicans have dominated the state legislature for over 20 years, they have not gotten this reform accomplished?

Why? Because weak RINOs like Phelan get big money from Big Labor, specifically the different teachers unions and associations throughout the state. He is a union whore who will do the bidding of union bosses, while kicking parents and children in the teeth.

But there is another legislative priority that the Texas GOP has fought for for the last four year, and which RINOs like Phelan have put off and killed over and over again:

a ban on sexual mutilation/modification of minors.

RINO Speaker Dade Phelan not only gets big money from Big Labor, but he gets big backing from the Big LGBT Hate Machine. He has a 43% rating from the major sexual perversion hate group in Texas called "Texas Equality," which ironically enough is obsessed with pushing LGBT privilege.

Phelan is a big part of this deviant, destructive scheme.

Since the regular legislative session opened in January 2021, MassResistance and other pro-family forces have been pushing hard to ban this horrific, terrible, torturous practice in the state of Texas. Different bills were introduced, and many of them passed in the state senate. They faced nothing but delays and filibusters in the House of Representatives.

Children should not be butchered or mutilated. They should not be subject to gruesome experiments in perverse attempts to change their sex. The parents who push these practices are committing child abuse. The Texas Department of Children and Families declared this ruling unequivocally.

There is a major reform that is moving across the country little by little, in which we need you to take a firm stance to support this reform, not just voter integrity, not just constitutional carry, and not just school choice.

We need you to come out strong against RINO Texas House Speaker Dade Phelan and DEMAND that he take action to end sexual mutilation and gender modification of minors. There is no excuse for this barbaric practice to continue anywhere in the fifty states of the United States, and certainly not in the United States of America.

President Trump, we are so grateful that you fought and are continuing to fight the Build The Wall to protect our country. We are glad that you are fighting for the Second Amendment, for unborn babies, and for voter integrity.

Now is the time to fight to protect the children once they are born and raised. We need your help to call out the Texas legislature, and demand that they pass legislation that bans

4. males in female sports (and vice versa) for all ages.

President Trump, you cannot Make America Great Again if you do not Make Male and Female Great Again. We cannot delay on this issue. You cannot remain silent in the face of the systematic maiming and butchering of innocent boys and girls outside of the womb!

Stand for Truth! Stop being silent! Speak out and Demand that the Texas State Legislature pass a bill to end sex mutilation/modification of minors!

Posted by Arthur Christopher Schaper at 9:00 AM