My name is Arthur Schaper. I am a member of We the People Rising. I learned about the anti-American, pro-open borders school board member David Barlavi from some of the local residents here in the Santa Clarita Valley.

I also noticed the mainstream media covered the large number of proud patriots who spoke out against David Barlavi’s disrespect for our flag and our country. 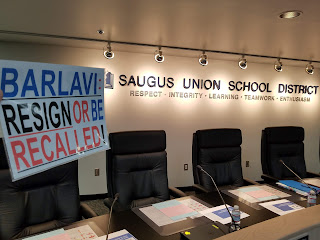 I further recall that during the Santa Clarita City Council meeting last year, Mr. Barlavi claimed that illegal aliens are just as American are those who are born in this country. Such an offensive, incorrect, and immoral comment needs to be respectfully challenged.

The truth is that public education has turned into government indoctrination, and that is unacceptable.

I have received word from parents in other school districts around the state that students are not learning American History at all. They are merely studying “current events,” when it has become crystal clear that they are imbibing liberal, anti-American propaganda, nothing more.

Mr. Barlavi’s represents this growing disrespect when he holds his fist in the air instead of placing his hand over his heart to recite the Pledge of Allegiance. A lot of brave men died for that flag, but not just for that flag, but for everything that this country represents. We are the latst, greatest hope on earth. This country is indeed the land of the free, the home of the brave.

The proof of this lies in the fact that millions of people every year all over the world want to become Americans. If America is such a racist, evil, country why would people want to live here? They need to come legally, however, since the rule of law is what makes America Great!

The United States was founded on Judeo-Christian principles, the divine commitment that all men are created equal, endowed by their Creator with unalienable rights – life, liberty, and the pursuit—not the promise, not the entitlement, but the pursuit of happiness. The American Trinity is a unique standard: Out of Many One, In God We Trust, and Conceived in Liberty. GThose three values are distinctly unique about the United States.

We are indeed an exceptional country, and unlike other nations, which have a long record of embracing myths and covering its sins, the people of this great country not only recognized the evils of slavery, but fought a blood civil war in six hundred thousand white men died on fields of battle that the black man would be free.

This country paid for the territory acquired in the Mexican Cession of 1848, and to this day this country has provided the opportunity for anyone, regardless of race or ethnic background, to achieve the American Dream.

That does not sound like oppression, but opportunity. That is not racism, that is reward based on hardwork and opportunity. This is America, and if Mr. Barlavi with it, he can pack his bags and leave. I believe that the Saugus Board of Trustees should censure Mr. Barlavi, and the residents of this district should ready a recall to remove him from office.
Posted by Arthur Christopher Schaper at 10:58 PM