Identity matters, and reality matters even more, especially now in a time in which corporate, legacy media outlets routinely lie to our faces, in which corporate interests, and even “American First” rabblerousers and politicos seem interested in putting themselves first, ignoring the foundational principles of our great constitutional republic.

Identity means very little without recognizing what is real. Just because I feel like a nut does not mean I am one. Just because I want to be President of the United States, or at least just because I wish President Donald Trump were still in the White House does not mean that either I or he is currently serving as President. Reality bites, even if it does not reflect moral truth. But you have to bite in order to eat. The pangs of reality help deal with worse pangs down the road. Reality matters. Conservatism can’t conserve anything, let alone fight to gain anything, if we conservatives refuse to tell the truth about issues. Wasn’t it a Soviet dissident who told people “Live Not By Lies” as the first step to fighting tyranny?

Tyranny is based on lies, based on forcing people to go along with lies, and that has been the modus operandi for California politics for the last ten years. We hear about California as the 5th largest economy in the world, and yet half of the population leaves their homes, only to find homeless sprawled all over the sidewalks, with waste, filth, and trash strewn about. We are told that California is a progressive utopia, when the irony of the word is lost on them (utopia means “nowhere” in Greek). There is no such thing as a progressive utopia. When the government declares war on small businesses; kowtows to teachers unions who do not want to teach students but still get a paycheck every month; enforces ridiculous lockdowns with mask mandates which have nothing to do with science or expertise, all while childing us to follow the science and listen to the experts, you have tyranny, not utopia.

California needs principled governance to govern us out of this mess. California is a mess, so messed up, it’s like a professional athlete who won gold medals running arduous decathlons, only to wake up thirty years later, declare to the world that he is actually a she, and that everyone should celebrate this strange transition of events. Of course, the mess that is California is aligned all to well with the mess that is Bruce “Caitlyn” Jenner. For biological fact and empirical reality, I will refer to Caitlyn as a he. It is scientifically, surgically, and psychologically impossible for a man to become a woman, and a woman to become a man. I just finished celebrating Mothers’ Day with other members of my local church, and it’s clear to me that not only men and women are fundamentally different, but that being a mother—and becoming a mother—is something that men cannot do.

We need new leadership in California.

That new leadership is not Caitlyn Jenner. 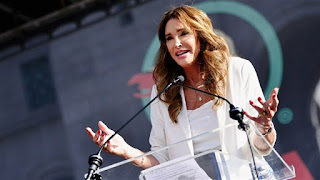 I am sickened that there are staunch, realistic, constitutionalist conservatives who are willing to jump on the Bruce Jenner bender. Trump voters are getting all giggly about this guy in drag. Even Sean Hannity gave Cait a softball interview, when he (Cait, that is) actually said “I support illegal immigration.” Following that slip of the tongue or a slip of the mind, Hannity slipped in to correct the recently declared gubernatorial candidate. “Thanks for having my back, Sean.”

Really. Really? Is this some kind of joke? Is this what California has been reduced to?!

California needs not just one recall, but a Total Recall (and not the Schwarzenegger kind). We need to recall what America is all about, what California used to be all about. But at the very least, we need to recall the fundamental basics, i.e. that there is male, there is female, and never the two shall transition.

“Cait for Gov” is madness. Why would anyone want to elect someone who is mentally ill to govern an entire state? Politicians are sick in head by and large, but a man who wears a slip with a few plastic bags shoved in his chest—that is just plain nuts!

My name is Arthur Schaper, and I am not voting for Bruce, Caitlyn, former Olympic Gold Medalist, whatever you want to call him (yes, HIM). This identity politicking, left-lean pandering among conservatives, even in liberal bastions like California, must stop.

Conservatives have been caving on the cultural issues for too long. Reagan WON two national elections by fighting for life, against abortion, for God, against secularism. Trump fought and won a number of cultural fights, too. One would think that the conservative movement would have learned the lesson by now that we need to fight, not flee, from contentious cultural issues. Want to win black, Hispanic, Asian votes? You don’t win those cohorts with social liberalism. How about some constitutional back-to-basics instead? How about fighting for faith, family, and freedom? Whatever happened to destroying the twin relics of barbarism, slavery and polygamy, which the founding GOP targeted in 1854?

Yes, California needs to Recall Newsom, but Californians must recall some sanity to California’s culture, and that starts with saying the ever so obvious: “No, Jenner, No!”

Posted by Arthur Christopher Schaper at 7:40 AM