Lohanthony, aka Anthony Quintal was a Zoomer YouTuber who was quite a craze on social media.

The girls loved him, but that love would not take them very far. This boy was an out homosexual. Strangely enough, these kinds of YouTube profiles are getting lots of attention. Pretty sad, and quite shocking.

However, good news has emerged.

Now at 21 years old, Anthony has announced that he is no longer acting on his same-sex desires. He wants to live a celibate, life in Christ.

Of course, the gay-centered magazines and news sites are condemning his liberty in Christ. 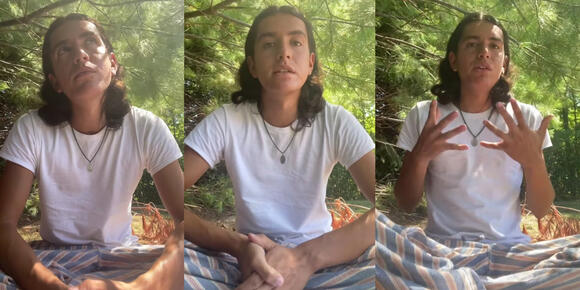 In the video, Lohanthony, whose real name is Anthony Quintal, says he was “decade long search for gay love that would ultimately end with disappointment … a void, which was later filled by Jesus Christ.” The video is in stark contrast to the ones he used to post, leaving many to speculate whether he is a victim of conversion therapy.

At the beginning of the almost 42-minute-long video, titled “Jesus delivers – Surviving Sexuality,” Lohanthony asks for the “spirit of Jesus” to guide him because it’s “the hardest video” he’s ever had to make. He reveals the sexual assault and trauma he’s suffered, including being sexually abused by an “older boy” when he was a child.

This part is essential for people to see. Like many who struggle with same-sex temptations, he was abused as a kid, abused by an older boy. This is a very traumatic experience, but he had the courage to share this very painful event in his past.

Lohanthony devolves into seemingly denouncing homosexuality, saying that through the pursuance of his same-sex attraction, he was “trying to fit a circle into a square, trying to find God’s love in all these other things.”

He says that he will now be practicing “Christian celibacy.”

“The holy spirit received me fully and changed me entirely into who God originally intended me to be: free from sin, held by forgiveness, and guided by his pure goodness, guided by God’s love,” he says.

The video was eventually re-uploaded to Twitter, where it alarmed former fans. “This lohanthony situation is horrifying i hope hes okay,” one user wrote.

“This lohanthony situation is quite sad actually,” another said.

What's really sad is that Anthony is facing so much abuse for speaking the truth and breaking out of behaviors and ideas that are destructive and dishonest. This experience is all too common for men and women, for boys and girls who leave the homosexual lifestyle.

Many began questioning if Lohanthony went through conversion therapy. “Okay i know nobody cares but this lohanthony situation is making me bawl. i grew up watching him & this whole situation is awful. conversion therapy is mentally & physically abusive. the fact that he had to go through that. i feel so bad for him. to hear a person that helped me come to terms with my sexuality when i was very young hurts. i really hope he gets the help he needs,” one user wrote.

For the record, it's not "conversion therapy", as though there is an effort by a therapist or counselor to get someone to change from one essential status to another. The normal, healthy status for individuals is to have desires for the opposite sex, or to refrain from sex.

Some took issue with him seemingly “linking homosexuality to a consequence of sexual abuse.”

Others felt that Lohanthony “returning” to the mainstream to preach Christianity and seemingly denounce homosexuality is too shocking for even 2020. “Lohanthony preaching conversion therapy and telling us homosexuality is wrong was not on my 2020 bingo card,” one wrote.

Ironically, Queerty News reported on Anthony's Coming Home announcement, and as expected they refused to recognize the real issues behind individual's homosexual desires:

He opens up about his struggles with drug and alcohol addiction, and reveals that he was sexually abused by an “older boy” when he was a child.

But then he takes a troubling turn by connecting his substance abuse and other addictive tendencies to pursuing his “same-sex attraction,” giving fans cause for concern that he’s undergone some form of religious ex-gay therapy.

Lo and Behold, the gay lifestyle is well, not so "gay".

Once should not be surprised that this story received very little attention. No one wants the news to get out that more young people are giving up the homosexual lifestyle, acknowledging that much of the whole way of life is actually quite painful, based on lies and unresolved hurts.

This is great news for many people. Young people who have been abused need to know that they have nothing to be ashamed of. If as a result of such abuse, they find that natural affections for the opposite sex are missing, and they have strong desires for the same sex, they can rest assured that there is hope.

They do not have to live in shame. They can come out, and come home, and they are coming out for Christ.

Posted by Arthur Christopher Schaper at 10:52 AM